Rose of the Oath is here!

Some of my readers will remember my review of Shadows of the Hersweald by Hope Ann. Back before then I reviewed Song of the Sword, the second book of the same series. Now I have for you a review of Rose of the Oath, the first book of the series.

Yes, you read that right. This is chronologically the first book. It’s a Beauty and the Beast retelling and it’s delightful.

War clouds the horizon and rebels gather under a mysterious leader. Alone, with her two younger sisters, Elissa watches the mountain road desperately for her brother’s return. Instead, she receives news of his capture by a strange figure covered in scars and cloaked in wolf skins.

With rebels drawing nearer, she sets off to find her brother. To save him. There is no one else who can.

Yet she soon finds the rose that granted her warning now holds her captive in safety. Outside the valley, war threatens those she loves most. Though her strange host claims the ancient promises of the Prince’s return and victory over the rebels, Elissa knows the blood-drenched truth. She is on her own. Elissa will do anything to keep her family safe, but more than one kind of wolf stalks the Blackwood and danger lurks closer than she could ever imagine.

I always enjoy stories of sibling relationships and this is a great one. In fact I’ve noticed all of The Legends of Light so far have sibling relationships at their core. Elissa would never have ended up a captive of the ‘beast’ if it were not for her love for her brother and sisters. yet it is the same love that makes her captivity so bad.

Hope’s take on the Beast is one of my favourites. He’s not an animal, but a beast of a man; both in look and in brusqueness. He has deep secrets, and he never speaks of them. But then, he doesn’t talk at all. But he does write and can be quite humourous from time to time. It’s an interesting dynamic. The beast also cooks. There’s none of those enchanted servants common to B&B stories.

Elissa can be a bit feisty. She won’t put up with the Beast’s worse behaviour, won’t let him leave wounds untended, and his clothes all shabby. She frequently questions his need to have a prisoner and keeps the one friend who is able to visit her a complete secret.

Wolves are a big part of this story. They’ve been roaming about for generations and are greatly feared. The Beast pays quite a lot of attention to the wolves and there are various rumours about him and them. But even more significant than the wolves are the roses. Surprise! There’s roses everywhere. They’re quite important. So is an oath.

There’s also a villain. Tauscher, the leader of the rebels.  And maybe someone else. I had suspcions, but they weren’t quite right. The book certainly didn’t end up where i expected it to.

The plot was good with stong themes and characters. The book is a novella, and the story felt just the right size. It wasn’t crowded, rushed or thin. It was good.

Add it to your shelf on Goodreads

Also, a bonus! For those of you who may not have seen it, Hope is also giving away the prequel to this Beauty and the Beast retelling, Rose of the Night – an account of how the ‘Beast’ became the Beast.

Add to your shelf on Goodreads

Finally, in honor of the official release of Rose of the Oath, Hope’s other novellas are $0.99 for this

Buy Song of the Sword: A Rapunzel Novella

Buy Shadows of the Hersweald: A Hansel and Gretel Novella 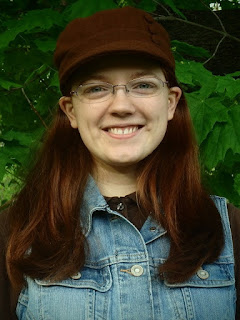 Hope Ann is a speculative fiction writer who lives on a small farm in northern Indiana. She has self-published three Legends of Light novellas and writes regular articles for Kingdom Pen as the Writing Team Captain. Reading since the age of five, and introducing herself to writing at age eight, she never had a question that the author’s life was the life for her. Her goal is to write thrilling Christian fantasy and futuristic fiction — stories she longed for while growing up. After graduating from homeschool, Hope now teaches writing to several of her eight younger siblings. She loves climbing trees, archery, photography, Lord of the Rings, chocolate, and collecting shiny things she claims are useful for story inspiration.
You can visit Hope’s blog at authorhopeann.com, or follow her on Facebook, Pinterest,Instagram, or Twitter.

brielleandela
•
Follow
There is a new book from @author.hope.ann! I had almost forgotten how much I love Hope's books, but just reading the blurb was enough to remind me. It sounds awesome. Lillian helps Followers. Royce hunts them. With the appearance of a mysterious stranger who can spin heat into rain, their worlds collide in a storm of treason, local laws, and buried pasts that threaten to destroy them both. And a teaser: All the gold in the world won’t help Lillian and her city as they struggle against a drought. Rain on the other hand… Rain might be worth more than blood. #thestormbringersname #legendsoflight #legendsoflightseries #hopeann #fairytaleretellings #retoldfairytales #rumplestilskin #rumpelstiltskinretelling #fairytaleretelling #newbook #2022release #2022releases #fantasy #newfictionreleases #newfantasy #newfairytaleretelling #booksbooksbooks #beautifulbooks
View on Instagram |
1/9

brielleandela
•
Follow
Happy Birthday to Kendra E. Ardnek @fairytalearista, an awesome human and the creator of I've of my favourite fictional multiverses. May this be a year of more joy and less sorrow. Now the best thing you can do for an authors birthday is buy their books. Kendra however had some of her books on sale, for FREE, from now until the 9th. (For Kindle Unlimited readers, Kendra's books are always available to you.) Included are ROSE PETALS AND SNOWFLAKES (Austen Fairy Tale #1), THE SEVEN DRAWERS (standalone and adorable), SEW, IT'S A QUEST and THE MERCHANT OF MENACE (Bookania Quests, the first book and the most recent one, many puns), and WATER PRINCESS, FIRE PRINCE (Rizkaland Legends #1, portal fantasy, prophecy, redheads, and quotes from classics). Also, THE WORTH OF A KING (standalone, probably the most traditional fantasy of Kendra's books, but also Rizkaland adjacent) is free the 8th and the 9th. Don't miss out. I already own her books as ebooks, but as soon as my mail comes my physical collection will be a little closer to complete. (The other four books I own were hidden under the light blue fabric.) #favouritebooks #booksofinstagram #portalfantasy #fantasyromance #yafantasybooks #fairytalerelling #bookania #rizkalandlegends #janeaustenretelling #snowwhiteretelling #freeforkindle
View on Instagram |
2/9

brielleandela
•
Follow
#nanowrimo2021 begins Sort of. I'm not exactly attempting Nanowrimo, but I do have goals that involve writing a new book this month. Beginning it that is. I don't know when I'll get to the end. What are your November plans? Or do you not really make plans and just freewheel madly through life? That can work too sometimes. More on the plans and what adversely I'm writing is over on my blog. Random fact: I don't really drink tea, but Taiwan milk tea is a different story. Probably because it's cold and has sugar.
View on Instagram |
3/9

brielleandela
•
Follow
I promise the random lace is relevant. Sort of. There's some mention of sewing in this book? Yes, I'm making excuses, but the lace had just come in the mail and after I washed it, it was so delightfully messy. It's all ironed now. As Long As We Live by @cortneymanningauthor is a lovely retelling of Snow White and Rose Red that sadly fell victim to my reading slump. However, it was also the book that helped me get out. You should read it (probably, I don't want to tell people what to do, especially when it comes to their reading taste.) Of you want to know why you should read it, click the link in my profile to go to my review and find the excuses I have for not having reviewed it already. #fairytalerelling #snowwhiteandrosered #snowwhiteroseredretelling #frostedroses #booksofinstagram #booksbooksbooks #beautifulbooks #bookswithfae #faerie #bookswithroyals #badbookstagramgoodbooks
View on Instagram |
4/9

brielleandela
•
Follow
Nadine Brandes has a new book coming next year. It's called Wishtress. Not Wishtrees, which is what I first read it about. Tress, like long hair and females, not trees with leaves. It's been quite a while since I read any of Nadine's books, do I'm excited to see what this one is about. The lovely graphic was designed by @meganmcculloughbooks Nadine is @nadinebrandes
View on Instagram |
5/9

brielleandela
•
Follow
#frostedroses Happy Book Birthday to Runaway Lyrics by C. O. Bonham. I have an interview of one of the characters over on my blog (link in profile) asking with directions to the rest of the blog tour. It's probably the character on the corner, but hard to be certain as this book features identical twins.
View on Instagram |
6/9

brielleandela
•
Follow
I can draw and I will now unleash my power across the world! The power to visualise my costumes before I make them that is. My drawing skills aren't all that awesome, but I've gotten them to a useful level. Moving on from discuss the troubles with clothing in writing fantasy, I'm now discussing making cosplay. In particular, I'm working on a design for Kyrin Altair from the Ilyon Chronicles. Link is in my bio, the fact that it's now spring in Australia is not.
View on Instagram |
7/9

brielleandela
•
Follow
I just finished reading Prophet's Apprentice by Cassandra Boyson. I've read a lot of good books and I'm not sure I could call this one spectacular or groundbreaking in anyway, but I just really, really liked it. It's a solid example of a book that uses fantasy to explore supernatural themes. Sort of a chosen one story, but not about being chosen as a hero to save the kingdom, but as a prophet to do, well, the weird stuff prophets get up to. Wyn doesn't really know what she's doing it why she's been chosen. The characters are fun. Wynn is super capable, except when it comes to most prophet matters, Phillip keeps tripping over his own feet and the prophet is a nutter who adores Wynn, is both wise and child-like, and does everything the great one asks of him without being perfect. It was a good book and I'm definitely planning to read more by Cassandra Boyson.
View on Instagram |
8/9

brielleandela
•
Follow
#silencethesirenchallenge Today I've got another reimagined fairytale (there might be a theme of me not liking my retellings to be straightforward) K. M. Shea's Snow Queen books (Heart of Ice, Sacrifice, and the short story collection Snowflakes) have a lot of elements of the original Hans Christian Andersen tale, but they're all spun into an epic fantasy romance. Lots of themes of courage, love and redemption and wonderful characters. The books have a lot of feeling, but a good dose of humour too and plenty of depth to the plots. I don't really want to make comparisons to Frozen, but there's an element or three that I strongly suspect were inspired by that. The snow Queen is a princess with ice powers who got exiled to an ice castle in the mountains and she's not evil: That's in there. Some sort of moose/elk creature: Actually has nothing to do with Frozen. That's really about the extent of the overlap. Heart of Ice certainly doesn't feel like a Disney movie. These books are linked to K. M. Shea's Timeless Fairy Tales and Fairy Tale Enchantress series, but they stand alone very well. (All images are versions of the book covers and belong to K. M. Shea)
View on Instagram |
9/9
View on Instagram